Rent a car and Airport Transfers in Bourgas 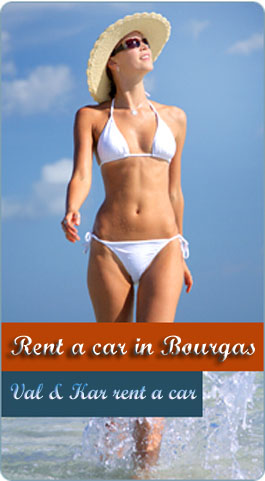 The city of came into existence almost 2000 years ago. At first it served as a trade and military settlement of the town of Apollonia (Sozopol).

Most of the residents were military veterans. The town had various military and fishermen towers, which led to its name being “Pyrgos,” meaning ‘tower.’ Slight changes lead to the nowadays name of the city.
Bourgas, the current name, is connected to the writings of Ottoman historians, who mention it for the first time in 17th century.
Until the end of the 19th century Bourgas remained small and lacked any major role. The first school and church of the settlement were built in 1868. After the end of the Ottoman rule, Bourgas developed into a modern, European city. A conflagration in XIX century destroyed almost the entire city, which had to be rebuilt afterwards. This event contributed to the modern look of the city.

The port of Bourgas was built in 1903 and its trade high school appeared in 1905. The high school prepared young experts to deal with the expanding trade relations with foreign cities. The state mechanical and technical school opened doors in 1925. The high institute of chemistry and technology appeared in 1963.
Today the port of Bourgas is the largest cargo port on the Bulgarian Black Sea coast. The airport in the city is one of the busiest in Bulgaria, especially during the summer tourism season.

Contemporary Bourgas features as the largest southeast Bulgarian city and the fourth largest in the country. In terms of trade, it plays a key role. Bourgas is also strategic energy centre because of the presence of Neftochim Bourgas, the largest refinery in the country.

During the summer hundreds of tourists visit the city. Various foreigners are among them. Bourgas offers excellent vacation conditions. It combines beautiful nature and beaches with the commodities available in a bigger city.

Restaurants, cafés and hotels offer various types of services for the different tourist groups. The marine garden is a quite place giving visitors the chance to take a quite walk and get acquainted with the work of artists and musicians.

Bourgas hosts cultural events, apart from being a tourist center. Its international folklore festival already has 35 years of history and attracts the lovers of Balkan folk music. The national flowers exhibition brings together people enchanted by colors and aroma. Bourgas and the Sea, a national music competition has become important event for Bulgarian musicians.