Rent a car and Airport Transfers in Varna

Varna - The Sea Capital Of Bulgaria! 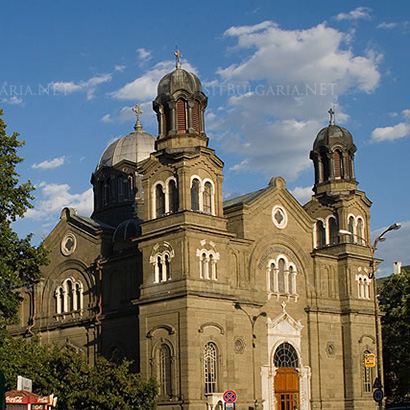 Varna's origins back to almost five millennia, but it wasn't until seafaring Greeks founded a colony here in 585 BC that the town became a port. The modern city is both a shipyard and port for incoming freighters and the navy, and a riviera town visited by tourists of every nationality. It's a cosmopolitan place and a nice one to scroll through: Baroque, turn-of-the-century and contemporary architecture pleasantly blended with shady promenades and a handsome seaside garden.

Some Facts About The City of Varna

Near the port of Varna, the oldest gold treasure in the world (dated from 4,500 BC) was found In 1972; an ancient necropolis with 280 tombs and 3,010 golden objects were found weighing over 6 kg altogether. According to experts it is the oldest processed gold ever found in Europe.

Today Varna is the largest city on Bulgaria's Black Sea coast and is the main port for both naval and commercial shipping. Because it is a close neighbor to the popular coastal resorts of Golden Sands, St. Constantine & Helena, and Albena, Varna has a cosmopolitan atmosphere. Varna is also the host city of numerous prestigious cultural events.

The city lies in the Bay of Varna, nestled in a deep valley between the Frengen Plareau and the Avren Plateau. Varna is over 110 km long, while its width, including newly erected residential quarters, is nearly 9km. The city’s structure resembles an amphitheatre as it follows the curves of the Bay of Varna. It is surrounded by gardens, vineyards and groves.

During occupation by Turkish forces in the last decades of the 14th century, Varna preserved its significance as a port and trade center. As Bulgaria fell under the Ottoman yoke, the only bearers of the Bulgarian cultural tradition remained within the folklore, the people's festivities, and the church paintings.

In 1881, after the liberation, the mayor of Varna Mihail Koloni brought up the question about a modern public park. His offer was at first scoffed by the local municipal councilors but a fund for the project was granted. Soon the park enlarged to 26 decares, 130 trees were planted, paths were cleared and "towards nightfall alleys thronged by a long train of gentlemen and dressed-up ladies".

Varna lies on the same latitude of the famous Atlantic resorts Bayonne and Biarritz in France, on a large, flat and high terrace on the northwestern most curve of the bay which juts some 7 km inland, so its very suitable for retirement homes in Varna, Bulgaria.