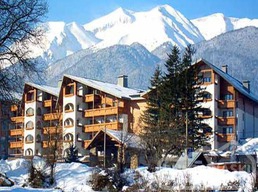 Bansko is Bulgaria's # 1 ski resort, having the best and most modern ski centre of all Bulgarian ski resorts. During the recent years a multi-million euros investment in a brand new skiing area has been made by Yulen, the company which has the licence to run the skiing area of the resort. Bansko has the best snow record and the longest ski season (15 Dec - 15 May) of all Bulgarian ski resorts. During the last couple of years this resort is under a massive investment process with new hotels and resort facilities being under construction. A brand new resort area with super luxury hotels and holiday apartments is being developed just opposite the Gondola lift, which also makes Bansko the resort with the best hotels.

Bansko Resort: The town of Bansko is situated nearby the river Glazane (left feeder of Mesta River) in the north- eastern foot of Pirin, right bellow the highest and most beautiful part of the mountain. Its name comes from the old Bulgarian word "ban", which means "master". It is just 160 kilometers away from Sofia and 6 kilometers from Razlog. Bansko has developed into a favourite ski & snowboard destination, thanks to the excellent ski facilities combined with the unique architecture and history.
The town of Bansko is located on 925 m. above sea level, and its skiing area is on 2000-2600 m. The Pirin mountain has a predominantly Alpine character and highest peak in the area is Vihren 2914 m.

Bansko Ski Slopes: The ski pistes are located in two main ski - centres- CHALIN VALOG (1100-1600 m) and SHILIGARNIKA (1700-2500 m). They are approximately 10 km above the town on the northern slopes of Pirin, and are easily accessible for approximately 25 minutes ride on the new Gondola lift which starts from Bansko. The total length of the marked pistes is 70 kilometers.

Although the resort is famous for not more than 10 years it has a lot to offer to its guests. The resort has excellent snow conditions with great snow cover from December until May.
44 Technoalpine snow cannons cover most of the slopes and make the ski season last longer. The maximum pleasure from the various ski pistes is guaranteed by 12 Kassbohrer slope maintenance vehicles. Thus the slopes offer runs and tracks for all types of skiers and will suit both beginners and experts. Read more about the development of Bansko's ski center here.

The snowboard lovers can enjoy the first on the Balkans fun park where people from all over the world are lead by the passion of the extreme. They can build jumps suiting their taste and abilities.

Every day skiers and snowboarders can take part in the competitions on the new piste on Shiligarnika.

The lift and pistes operator in Bansko takes care for the maximum comfort of the skier and snowboarders with the exclusive 8-seats Gondola cabin lift by Dopplemayer, five high speed quads of the latest Doppelmayer models, one 3-seat lift by Poma, 7 drags and 10 baby drags. The total length of the lift equipment in the resort is 26 kilometers. All ski equipment can be used by one chip-card from SkiData.

Huge monitors showing pictures from the different pistes is based on the starting station of the Gondola. Thus people are informed for the wind and temperature conditions before climbing up on the slope.

Slalom and Giant slalom runs are available. Bansko offers a cross-country track with a total length of 5 km. A 3 km ski run Rollbahn track is situated 2 km far from the town. More about the ski runs and lifts in Bansko!

The unique combination of a well developed mountain resort and a living historical town turns it into an elegant place for entertainment. Virtually every house has its own story to tell, which indeed can turn your vacation into a journey to the Bulgarian traditions. The traditional Bansko taverns (called "Mehana"), with their exceptional charm and style offer local atmosphere by their cuisine and good selection of Bulgarian wines. Most of the local "Mehanas" even offer live folk music. Many local cafes and bars offer refreshments. Discos and night clubs work without time limit, and usually close early in the morning.
More information on the RESTAURANTS in Bansko read here!

Of course there's a lot to see in the town of Bansko itself, with around 120 cultural and historical monuments and alot to explore. Various souvenir shops offer the creations of the local artists and smiths.

Bansko is known to be unique site of international significance. Except for the beautiful The Pirin Mountain the town possesses rich historical sites. Remains from ancient fortresses in the Staroto Gradishte site, are situated just four kilometers in western direction and the Ulen site along the Demianitsa river flow. Nearby Staroto Gradishte site there are Thracian mound hills.

South of Bansko is situated the National Park Pirin included in the UNESCO list for cultural and natural sightseeing. The park is rich with its lakes, waterfalls, caves, venerable trees and historical sites. Bansko together with Dobrinishte are also famous for their mineral springs, the reserve Bayovi dupki- Djindjiritsa. See more about Bansko's history here.

We also recommend a visit to the famous Rila Monastery and the busy city of Sofia. For trips of interest, please make reservation here.