Gabrovo is situated 390 metres above the sea level, along the two banks of the Yantra River, at the northern foot of the Shipka Balkan Mountain (Central Stara Planina). It is located 220 km north-east of Sofia, 274 km south-west of Varna, 150 km north-east of Plovdiv and 46 km south-west of Veliko Turnovo. Gabrovo is in immediate proximity of the geographical centre of Bulgaria, Uzana ski resort.


Gabrovo originated during the Middle Ages as a strategic settlement, because of its proximity to the Balkan Mountain passes. At the end of the 12th century, Gabrovo was influenced by Veliko Tarnovo - the capital city of Bulgaria during that period. Therefore the town flourished with the handcrafts and trade development. The quick economic growth and the national revival were the reason for the opening of the first Bulgarian High school called after the name of its founder - Vassil Aprilov. Beautiful Revival houses, churches, bridges, drinking-fountains, a clock tower (1835) were built then. During that period of growth the unique Architectural Ethnographic complex “Etura” was found as well. The complex represents the authentic life of the typical craftsmanship settlement from the National Revival period.

The open air museum is situated 8 km away from Gabrovo and is one of the most visited tourist attractions in Bulgaria. The visitors will have the spectacular opportunity to see authentic wheels and mills moved by water, metal ornaments, pottery articles, copper utensils, braids, hot buns and many other traditional potteries and colorful rags, made by skillful Gabrovo masters. The narrow cobblestone streets, the stone drinking-fountains, the house with the tavern, the clock tower and a lot more other authentic details complete the unforgettable picture of the architecture preserve. 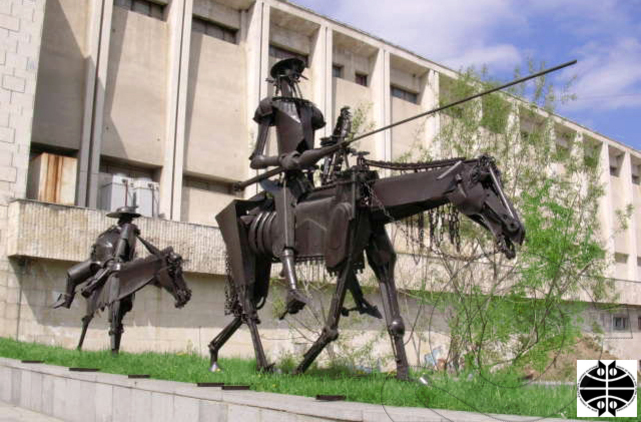 One of the most impressive attractions, peculiar to the town is the popular House of Humour and Satire in Gabrovo. Works of authors from 153 countries are exhibited in 10 halls with an area of 8000 square metres. The House collects and car hirepopularizes the humour and the satire from all over Bulgaria. Other places of history and culture tourism are the National Museum of history, the National Museum of Education and the first High School of Bulgaria, built by Vassil Aprilov. Gabrovo is also famous for its variety of stone bridges, scattered all over the town.

is one of the masterpieces of the Bulgarian architecture. It was declared a monument of culture, and was fully renovated in 1968. Now it is a pedestrian zone. “Igoto” (the Slavery Bridge) represents four statues. One of them is the statue of the founder of the town, Racho Kovacha. The others are a roaring lion, a woman, representing Bulgaria and a typical Bulgarian man – strong and vigorous.
Other impressive bridges include the Four-Lions Bridge behind the Theatre Building, the Craftsmanship Bridge and the White Arts Bridge, which has 4 gracious statues - the Music muse, an actor with a theatre mask and two Bulgarian girls, playing “rachenitsa” dance in traditional Bulgarian costumes.

Nowadays the town has 3 professional theatres - the Racho Stoyanov Theatre of Drama, The Puppet Theatre and the Experimental Theatre of Satire and Variety.
In August a Balkan youth festival, called Youth on the Balkans is held in Gabrovo. At the end of September the town also hosts the Days of the Chamber Music.
Gabrovo also has its own Planetarium and Zoo, situated in the Gradishte area.

is a medieval fortress wall, which is situated 3 km from Gabrovo and offers a unique overall view of the whole town. The ruins of the Gradishte fortress are remains from a huge complex, built between IV - V C to protect the pass to Shipka Peak. Gradishte area is also a favourite place for picnics. Very tempting and worth to be visited by tourists is the Lilacs garden complex. It has wonderful mountain location, 16 km away from Gabrovo at an attitude of 840 m above the sea level.

, the actual geographic centre of Bulgaria is another point of interest close to the town. It is located 1120 m above the sea level, which favours the development of winter sports. Existing infrastructure, ski and hotel facilities make Uzana a desired tourist destination.
And finally Gabrovo is well kept by ecology lovers. Bulgarka Nature Park was established in 2002 to preserve and maintain the flora, fauna and the cultural heritage of Gabrovo region. The park is a natural habitat of more than 1300 plants, 32 of which are considered as protected species and included in the Red book of Bulgaria.

Wine and Dine in Gabrovo:

Gabrovo offers a huge variety of traditional restaurants with cosy fireplaces and Bulgarian warm atmospehere, where special national meals and delicacies are served. A sparkling glass of wine and a nice company are the perfect choice to complete the holiday, spent in Gabrovo.